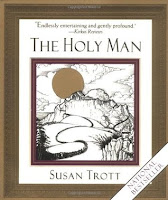 Any trouble under the sun can be overcome by silence.

Excerpt from The Holy Man
by Susan Trott

Ed wants to propose the Lightfeather Duncan, and wants Chris to write the proposal letter. Chris objects saying that Ed is going to have to talk to Lightfeather eventually. Ed counters with this:

"Well, I saw Betty and Vern Kachemak over here at the Wash 'n Dry. They were doin' seven loads of laundry. They were there for about four hours and neither one of them said a word to the other one. Well, except for Betty. She kind of, well, grunted once. And then Vern went over and put a sheet of softener in the spin cycle."

Elaine, thanks so much for the quote! I remember this scene, probably because I've re-watched the show so many times. :-) Clearly, one grunt means put a sheet in. Two grunts now? That would be saying a lot!