Among some of the data regulations being proposed in Europe recently, there's something called the "right to be forgotten". Its goal is to allow information about you to be removed from online networks so that it's no longer available to the public.

Whether I support the proposal or not, I must admit that I like the words on their own. I have a fondness for the unintended meaning in such phrases. Another phrase that I enjoy is the "right to remain silent". My enjoyment has nothing to do with the actual legalities. Rather, I like to imagine that these rights pertain to me, the quiet guy that I am. It's silly, I know, but it feels good to imagine a world where the right to be me is protected by law.

In a world where many seem to fear silence, and where those who attempt to escape -- in essence, those who try to be "forgotten" for a little while -- are looked upon with suspicion, it's nice to dream that there's a refuge.

I like to believe that I have certain rights whether they're made into law or not. Still, it's fun to think of those rights as being protected by the full force and might of ... the people of the world. Such rights should be universally acknowledged, should they not?

Knowing What It Means

Everyone is different; yet, some are more keenly aware of it. Some are treated differently. Because you know what that's like, you have a responsibility to those who are also different. You owe it to them to be as understanding as you can be. Even though you may not have always received the same understanding, you know that we all deserve it.

And no matter how much you learn about the traits that make you like others, you're always going to be your own kind of person. You're going to be different even from those who are most like you. Realizing that you weren't alone, and that you weren't the only one going through such things, was just a tiny part of accepting that it's okay to be you. It was always okay.

Others might not understand your differences, but I think it's important that they also accept them along with you. Especially the ones that matter: the ones that you choose to care about. They, too, should know what it means.

Email ThisBlogThis!Share to TwitterShare to FacebookShare to Pinterest
Labels: notes to self, what it means to be an introvert

On The Thoughts Of Others

Excerpt from The Perks of Being a Wallflower
by Stephen Chbosky

... there were times when I couldn't help but sense an area inside Kumiko to which I had no access. In the middle of the most ordinary -- or the most excited -- conversation, and without the slightest warning, she might sink into silence. It would happen all of a sudden, for no reason at all (or at least no reason I could discern). It was like walking along the road and suddenly falling into a pit. Her silences never lasted very long, but afterward, until a fair amount of time had gone by, it was as if she were not really there.

Excerpt from The Wind-Up Bird Chronicle
by Haruki Murakami

A Man Of Few Words

My hesitancy in speech, which was once an annoyance, is now a pleasure. Its greatest benefit has been that it has taught me the economy of words. I have naturally formed the habit of restraining my thoughts... A man of few words will rarely be thoughtless in his speech; he will measure every word. We find so many people impatient to talk... All this talking can hardly be said to be of any benefit to the world. It is so much waste of time.

Except For That One Time 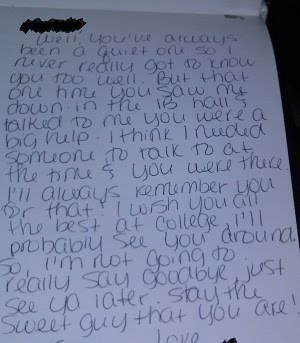 Well, you've always been a quiet one, so I never
really got to know you too well. But that one time ...

I don't know what I was doing there at the time, but I was probably skipping class when I saw her crying at the end of the hall. Though I could have walked away, my choice was to walk towards her and find out if she was okay.

It was probably the first time that I spoke with her. Striking up conversations doesn't come naturally for me, but it seemed necessary. She was clearly distraught, though I never found out why. I simply offered my company. That was enough, apparently. Even a quiet guy can provide some comfort.


This is the end of my series on yearbook snapshots. I have many more, but I think the point has been made:

When people noticed me, it was usually because my quietness was so loud.

So quiet but so nice 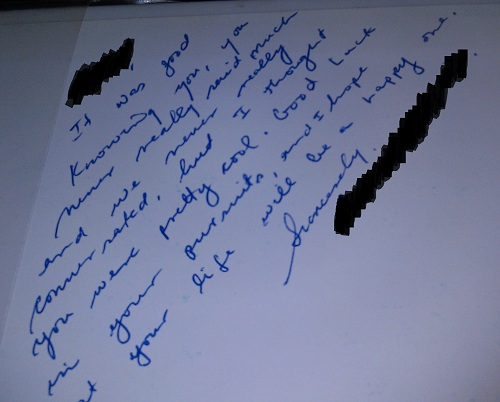 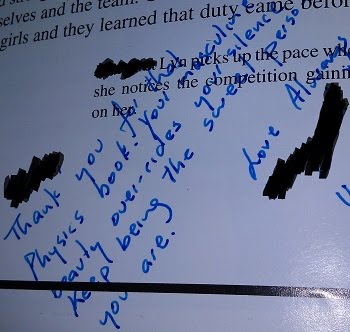 Your masculine beauty over-rides your silence


As bad as it is, this one makes me laugh. Or blush. Not sure. 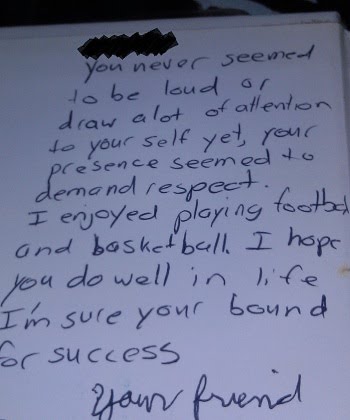 You never seemed to be loud or draw a lot of attention to yourself,
yet your presence seemed to demand respect